The Denver City Council voted late last night in favor of a series of ordinances that would allow developers to build as high as 16 stories in the neighborhood surrounding the 38th and Blake RTD Station in Denver’s River North Art District (RiNo) in exchange for the creation of affordable housing. 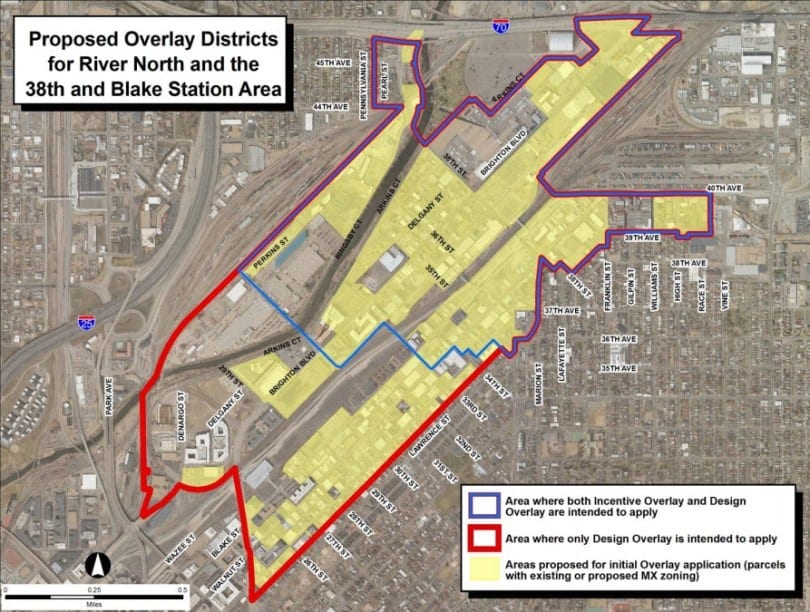 Image from the City of Denver presentation to City Council

The zoning changes are the culmination of more than two years of work and input from more than 250 stakeholders.

“The community told us they want more living and working options around the 38th and Blake Station, but they also want it to be an affordable, well-designed place for everyone,” said Brad Buchanan, Executive Director of Community Planning and Development for the City of Denver. “So, we created an approach that means the taller you build, the more you’ve got to invest in the community.”

For developers that investment means either building affordable units in the neighborhood based on square footage above a specific height; paying five times the city’s existing affordable housing fee for the square footage of the incentive-enabled floors or provide community benefit within the development by providing space for child care, groceries, nonprofit office space, artists’ studios or other uses that would serve the neighborhood.

Residential developments or mixed-use developments that are 50 percent or more residential would not have the option of the paying the additional fee for affordable housing. Developers of these projects would be required to build a certain number of units (varies by the square footage and the height above base zoning) that would be priced to meet 80 percent of the Area Median Income (AMI). At 80 percent AMI, that would place the cap at approximately $176,000 for a one-bedroom unit, $216,000 for two bedrooms, and $240,000 for three bedrooms.

Developers of commercial projects would have the option to build affordable housing units offsite, pay the higher fee for incentive-enabled floors, or pay the existing citywide fee and provide spaces for community benefit.

Image from the City of Denver presentation is color coded to show the suggested building heights. They decrease in size as they approach neighborhoods with single-family homes.

Council President Albus Brooks, who championed the zoning changes, said the measures are designed to increase density while also boosting the inventory of housing that’s affordable. “The question of how to fix the housing crisis, keeps me up at night . . . This plan puts density where it belongs,” said Brooks. “Zero development will lead to more displacement. The answer lies somewhere between skyscrapers and soaring housing costs. In order to close Denver’s economic gap, we don’t need a new economy. We need to adjust our economy to make it work for everyone.”

At last night’s meeting, council members mentioned the possibility of applying the height incentives elsewhere throughout Denver, especially near transit stations. Councilman Rafael Espinoza mentioned the neighborhood near 41st and Fox as a potential candidate. 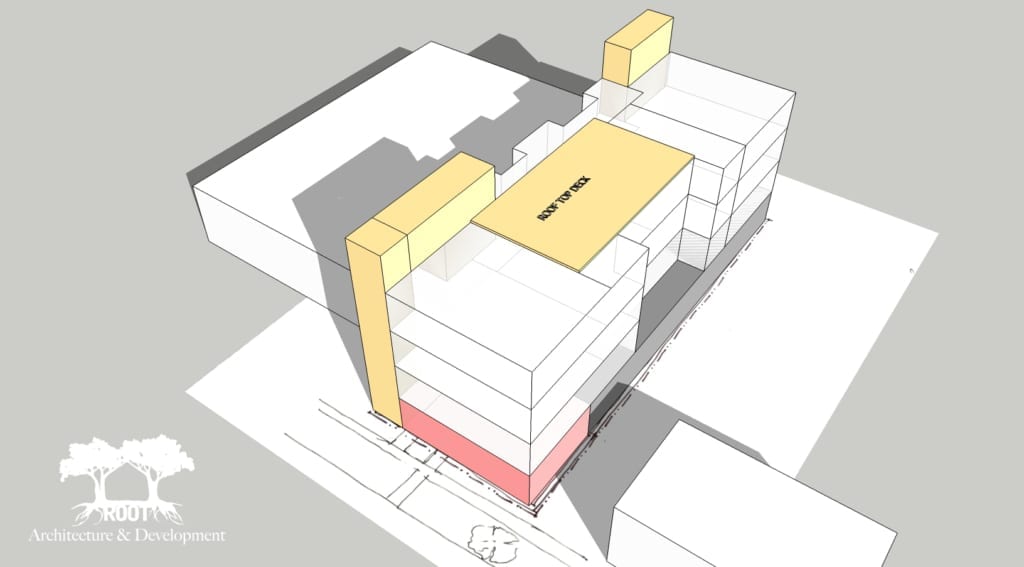 That would make projects, like the one shown above, much easier in the future. Root Architecture and Development worked closely with the City of Denver to rezone a property on Jason Street near the transit station on 41st and Fox to allow for an 8-story mixed-use development that would contribute to a transit-friendly neighborhood and the overall fabric of the city.

The new zoning changes are modeled after efforts being piloted in Brooklyn, Seattle and Portland to meet the need for housing while also providing an affordable option to residents being priced out of city neighborhoods due to gentrification.

To learn more about the zoning changes, visit the 38th and Blake Area Plan Amendments. To learn more about how Root Architecture and Development can help you with your next residential, mixed-use or commercial project, email info@root-ad.com.